Student Paralyzed Before Wedding: Doesn’t Give Up

Living with a disability was far from my radar. Ben and I met at high school youth group and continued to date even though we went off to different universities. We were nearing college graduation, both applying to graduate schools, and looking forward to marriage.

I will never forget that Thanksgiving weekend. Ben popped the question and three days later we went down to a family reunion of sorts with more than two-dozen of Ben’s family members. After the meal, we all gathered to take a family photo on the deck of the house. Just before we took the picture, the deck collapsed. In the 15-foot fall, I sustained an L-1 burst fracture resulting in an incomplete spinal cord injury. In an instant, I went from feeling on top of the world to feeling like my world was shattered and not knowing what my future would hold.

At the time, I couldn’t move my legs at all or even sit up in bed. I spent a week at Greenville Memorial Hospital in SC, before transferring to Shepherd Center in Atlanta, GA. All the while, Ben was constant. He finished up his classes that semester and graduated in December somehow staying focused through it all. There were definitely moments during the 7 weeks I was at Shepherd that I was not sure if we were still going to get married. I often had those “why me?” moments questioning why I was the only one out of the 20 plus people there who was seriously hurt. There were other injuries, but Ben was one of the six that came out unscathed. I could not wrap my head around it. It was crazy and it still is crazy to tell people what happened.

God reminded me and continues to remind me not to lean on my own understanding though. For instance, when I was 13-years-old, I came down with an autoimmune condition that left me so weak I required heavy doses of steroids and numerous appointments with therapists and doctors. It took 5 years for me to recover so I knew the road ahead would be challenging, but not impossible. He healed me then and He could heal me once again. All the while I doubted, questioned, and harbored bitterness, my Father was surrounding me with His love. I had chosen to pursue occupational therapy to help people gain their independence and yet I found myself trying to gain my own independence. I hardly even knew what paralysis really meant.

There was one moment I remember when I was up all night with a UTI and couldn’t keep anything down. It was the weekend and we would have to wait until the morning for medicine to keep the nausea away. I was so sick that all I could do was cry out in Jesus’ name to comfort me. It was the middle of the night and as my eyes were filled with tears, I began to feel nothing else that had felt quite as comforting. I can’t even explain it.

Once I left Shepherd, we went back home to Asheville where Ben found a job at a home appliance warehouse and I continued physical therapy. I think the most emotional time for me during that transition was the initial shift as I was coming back home. Nothing seemed like it was the same. At Shepherd, I was in a safe place where everything was accessible, there were people who knew exactly what I was going through and there was help right when I needed it. I had gotten close with the therapists and made so much progress. As hard as it was right after my injury as I lay awake crying every night in the ICU not only because of the physical pain but also the emotional pain, it was harder still to find that peace I so desperately longed for when I came home.

Home wasn’t the same, the same house, yes, but the old me was gone. I had to first learn how to navigate through the house and I wasn’t even strong enough to transfer onto my own bed by myself. Nothing felt the same. It didn’t help that everyone at home would go to work during the day and I was stuck at home waiting for someone to drive me to my appointments. It finally hit me that I couldn’t go back and change the past, that the new me was all I had and no one else could quite understand. I was starting over, and I had a long way to go. I still had to get married, finish my undergraduate degree, and get back to walking.

With all the love and support I had from my family and from Ben as they came alongside me, I was not going to let this stop me. It didn’t matter how soon I got married, it didn’t matter that I had to take 4 summer classes to graduate, and it didn’t matter that the apartment we found wasn’t super accessible, and it didn’t matter if my old friends thought of me differently. All that mattered to me was spending the rest of my life with the man that never left my side through it all and following my dream of becoming an OT. In a way, I built up a wall around myself. Once decided I could still accomplish those goals that wall had to come down too. I couldn’t stay in those dark places I found myself in and I wasn’t going to let anything, or anyone, get in my way.

After having a quiet and restful honeymoon, we soon realized the first few months we were married would be quite the transition, to say the least. Ben had found out he didn’t get into medical school and instead his main goal was to figure out how to best help me. As I attended class, studied, and continued my exercises at the school gym, he was making dinners, driving me to class and cleaning up the apartment. We may not have known that this was what God had planned, but we were not going to let the experience break us apart. We were a team that was building a closer relationship with God together and building the foundation for our marriage as we both prepared for further schooling. After I graduated, we came back to Asheville and Ben got a job as a pharmacy technician. I was still stuck at home wondering if I should get a job just so I felt like I was contributing to society. I wanted to share the responsibility of working but I couldn’t even drive myself to a job yet, because I was still waiting on hand controls for our car. I think Ben knew I felt frustrated by this, except he also wanted to do what he could to support our new family in the way with the capacity and role of provider. It was hard when I wanted to talk to him about it, but I knew at the same time there was not much either of us could do to change the circumstances. It was out of my control. I had to accept that it was a season of waiting and my time would come.

Finally several months later, I thought the wait was finally over. It was time for me to send in my deposit to Lenoir-Rhyne for OT school. Ben was still waiting to hear from schools, and it was about the week after we had found a 1-bedroom apartment in Hickory that he was accepted to Campbell. I really wasn’t happy about it at first even though I wanted to be for his sake. It meant we would have to live apart again and make the 3-hour drive back and forth on weekends. I was being selfish and didn’t want to have to figure out how to support my husband from a distance while in grad school and in a wheelchair. It was one thing in college while we were dating but this would take another level of perseverance.

We never gave up or lost sight of the end goal despite all the moments of heartbreak every time we had to say goodbye. Even though we longed to see each other, and we did everything we could to pass the time to distract ourselves from how much we missed each other. Of course, Ben was always studying and taking quizzes or tests and might not have time to visit or be visited on weekends, which made the time we spent together even more precious. There were so many nights when I stayed up wondering if I would ever get to sleep, waiting for the time to come when we could finally move in together again.

I had to learn how to do all the activities (cooking, cleaning, dressing, laundry, buying groceries, getting gas) I already never wanted to do with even more effort. Some days I just couldn’t find that extra bit of motivation. I would usually put them off and wait until the next time Ben was coming so we could all the chores at the same time. I felt somewhat guilty for saving them all but was also battling the thought, “You can do that so much more easily.” Even though I was taking advantage of him, it helped us come up with strategies that we use now to split up chores. We’ve learned to share the responsibilities and to speak up and communicate when one of us feels like we aren’t pulling our weight or feels overburdened. He does the heavy lifting (i.e. vacuuming, taking the trash out), I do the lighter lifting (i.e. dusting, scrubbing the toilets) and we share everything in between (i.e. making dinner, folding clothes, unloading the dishwasher). Two years later, I walked across the stage with my walker and braces to receive my master’s degree in occupational therapy. I can hardly believe my dream is reality!

Now, Ben and I know what it is like to have our lives completely changed in a moment, but we also know how to pick up what’s broken and rebuild it piece by piece. We can tell other people that it can be done! It is turning into something that is bigger than us, that is exactly what God wanted!

Ben has one year left of school before residency, and that will bring its own set of challenges. I would never have chosen these shattered pieces of my past, but I have learned so much from them and my faith has been strengthened because of them. I still believe the best is yet to come. 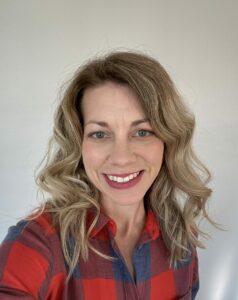